The Peterstown Book is a compilation of articles published in the Elizabeth, NJ based Peterstown Newspaper over the past 14 years. It records 100 years of history of an Italian-American neighborhood, preserving the rich culture through articles and images of families who lived with pride as Americans and weaved into society their old-world traditions and values. It is a perfect-bound, oversized book that is 800 pages and filled with thousands of photos. The book is divided into chapters based on themes including a cookbook chapter featuring over 200 recipes.

Publisher Joe Renna explains in the introduction “Four generations of my family lived in the same corner house in the Peterstown section of Elizabeth, N.J., and when I sold it and moved out of the neighborhood I was filled with emotion and nostalgia, and probably guilt. It was the end of a way of life for me and, especially, my daughters. The close-knit neighborhood was slowly disbanding, at least physically. It was only natural that as generations grew, the housing stock could not accommodate the populous. The ease of mobility and the ability to upgrade to home ownership were big factors in the exodus from the neighborhood. It was the realization of The American Dream. The reason our forefathers immigrated in mass a hundred years ago. The greatest loss to the community as families moved away was the personal disconnect. The daily interaction between neighbors was disappearing, and with it the sharing of information, old and new. It was the prospect of losing that oral history of the neighborhood that prompted me to start writing.”

Joe and his wife Tina collaborated in putting the Around About Peterstown newspaper together. It was designed first as a newsletter for the new social club that guys of Joe’s generation formed, The Sons of Peterstown. Joe started gathering stories from his old neighbors and taking photos. The first run was 3,000 newspapers, but the floodgates soon opened with requests for the newspaper and people submitting news to share. Circulation soon peaked to 15,000 newspapers with subscribers from all over the country, and Italy. The newspaper was not only popular with people who were from Peterstown or Elizabeth; it had readers from all over and of many ethnicities: German, Irish, Jewish etc. The themes that Joe wrote about resonated with many folks who went through the same experiences, immigration, The Great Depression, World War II, etc. The stories were universal, but Joe used Peterstown to illustrate them.

As the paper grew the Renna’s published up to 28 pages every two months. They were never short for material and always had stories in reserve. It remained a labor of love of Joe’s for 14 years. An inordinate amount of time went into putting each issue together. Cost for printing was covered by a stable of steady advertisers. Joe found that the positive response, especially from senior citizens, was motivation enough for him to continue. The biggest motivator was the recording of the oral history, his original inspiration.

Joe recalls “There were so many great people to come from the neighborhood who would probably be forgotten, or whose stories would never be told again. Some of the greatest stories are about people who were not celebrated but did great things privately, and quietly. It is the butterfly effect in full operation. The success and prosperity of the current generation is directly tied to the culture that was developed by our forefathers, who first immigrated to America. They took the best aspects of their culture with them from Italy and wove them into the fabric of their new society in America. Love of God, love of family, love of county, love of neighbor all played a key role in the lifestyle of the community. These values, along with a work ethic based on fairness and integrity, was practiced and taught.”

Our forefathers had pride in themselves; that elevated everything to a higher standard. This is evident in many of the stories. It can be seen in each chapter, whether you are reading about craftsmanship, sports or cooking. Though the teacher / apprentice aspect of the parent / child relationship is evident, what makes the child achieve is the work ethic and moral compass that is instilled in him. A carpenter cannot teach his son how to be a doctor, but he can show him how to make the right decisions to be anything he wants. This is the greatness of the Italian-American Peterstown community. The first wave of immigrants came with little but the clothes on their backs, yet they were able to reach the heights of The American Dream through integrity and hard work. They could never have immigrated to the world as it is today. Their focus was giving their children an opportunity for a better life. It is what publisher Joe Renna strives for today, a hundred years after his grandfather arrived from Italy and settled in Peterstown, NJ.

For more information visit PeterstownNJ.com for a list of retailers or to order on line email info@rennamedia.com, or call 908-418-5586.

The Peterstown Book is the 100-year history of an Italian-American neighborhood told through stories about the people and families who lived there. The book records the oral history in danger of being lost and illustrates the traditions and customs of the community through thousands of photos, hundreds of recipes, and anecdotes shared by residents past and present.
Every aspect of life is represented in its chapters, especially the dynamics of the family, social clubs and of the church. The book shows the contributions that were made to society in the arts and entertainment fields, sports, science, humanities and of course “the food.” Over 200 recipes accompanied by background stories fill a hundred-page chapter.
This book is not only about the greatest generation but also of those who gave rise to them and the generations that followed. It is a nostalgic look at The Great Depression, WWII and Baby Boomers. It also serves as a guide to future generations who, sadly, will not experience the sense of community that was prevalent in these old-time neighborhoods. The Peterstown Book intends to preserve the great Italian-American culture of the past century. 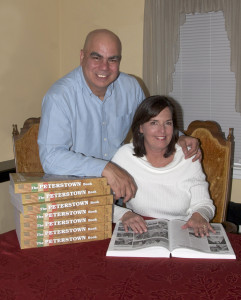 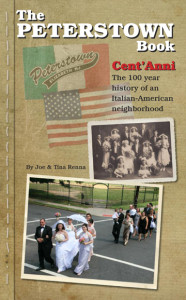 Cent’Anni
The 100 year history of an
Italian-American neighborhood